The earliest dated  game known, also of Europe,  was invented and sold by John Jefferys, at his house in Chapel Street and printed for Carrington Bowles, Map & Printseller, N° 69 in St. Paul’s Church Yard in 1759.

The game starts at Dover and ends in London, passing through Iceland, Russia,  Asia Minor Africa and Malta. 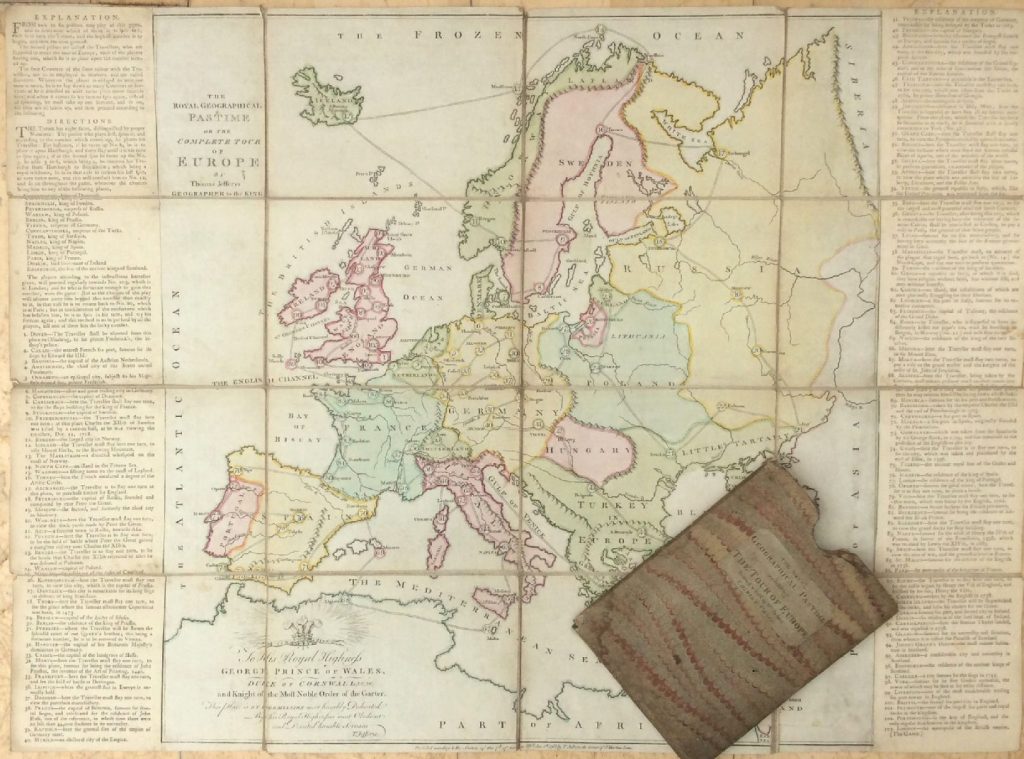 Royal Geographical Amusement, or the safe and expeditious Traveller through all the Parts of Europe by Sea and by Land: an instructive game.

Calculated for the Improvement of the Young Learners of Geography by Dr. Journey.

Although dated 1787 in the imprint, the letterpress text has been revised, referring to the fall of the Bastille in 1789,

80 reads, “Stockholm, the capital of Sweden. Stay here two turns to view the tomb of Gustavus IIId. King of Sweden, who was shot at a masquerade on the 29th of March 1792, by one of his own discontented officers; for which villanous [sic] act he had his head and right hand cut off.”
It was originally published by Robert Sayer in 1774.
Laurie and Whittle succeeded Sayer in 1794 and were in turn succeeded by R H Laurie in 1813. It would appear that the game is an impression from the original plate with the lettering altered.

Royal Geographical Amusement – Condition – Sheet is lightly foxed, / rules are on the sheet / slipcase is good 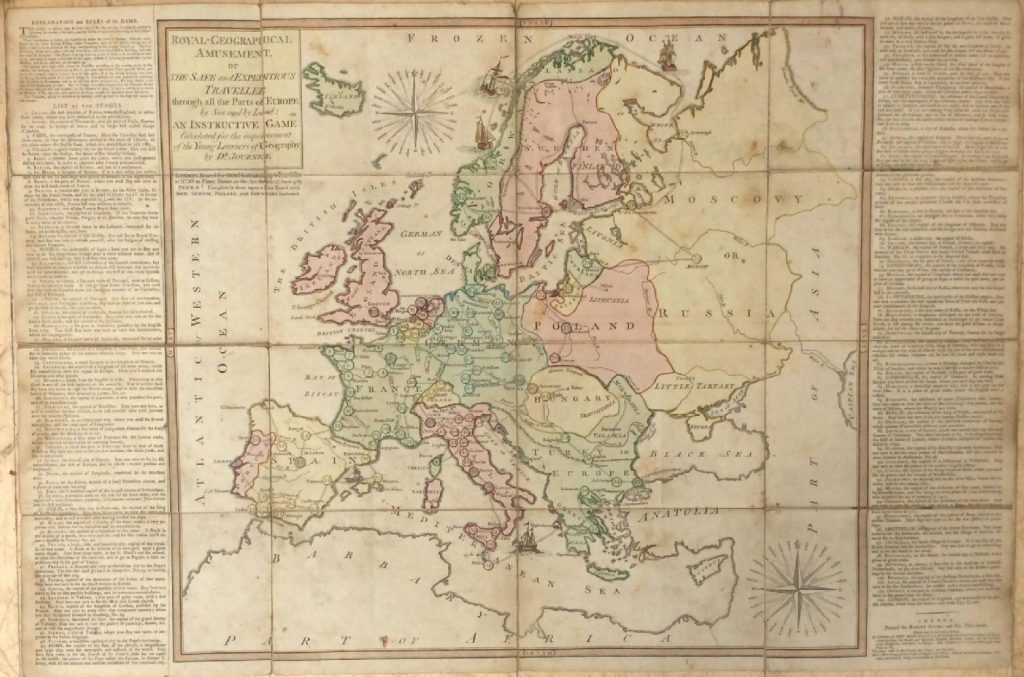 Wallis's New Geographical Game Exhibiting a Voyage Round the World 1796

Undated but with the long S, that the later versions (1802) does not have.
In a slipcase dated 1802, so it may have been sold initially without a slipcase and then the style updated, or it could have been put into the slipcase at a later date.

It is a coloured engraved double hemispherical map.
It shows how little appears to be known about Africa at that time
ie Guinea ..of which little in known to Europeans.”

59 – Bhering’s Straits – also called Cook’s Straits
60 – Cook’s River on the north west coast of America so called from its discoverer, Capt Cook
61 – NootkaSound – discovered by Capt. Cook
Back to New Zealand
91 – Cook’s straights
92  – New Hebrides – visited by Cook in 1774
93 – Friendly Isles so named by Capt Cook in 1773
94 – Owhhyee – the largest Sandwich Island, here the traveller must stay a turn to view the bay where Capt Cook was unfortunately killed in a contest with the natives, 14th February 1779
97 – “Cook’s ne plus ultra” – Capt Cook being prevented from going further south by immense fields of ice

Condition – Voyage Round the World / Slipcase – good engraved picture – scuffed and rubbed at the edges / Playing sheet – this is very good – clean and bright – well colored. / Rules – at base of playing sheet. These appear (in all versions we have seen) to be a separate piece on paper added to the game. This was presumably to keep it updated without reprinting the map.

There is a slight difference in the punctuation, as well as the change to the letters ie no long S to the version printed by J Crowder and E Hemsted in 1802. 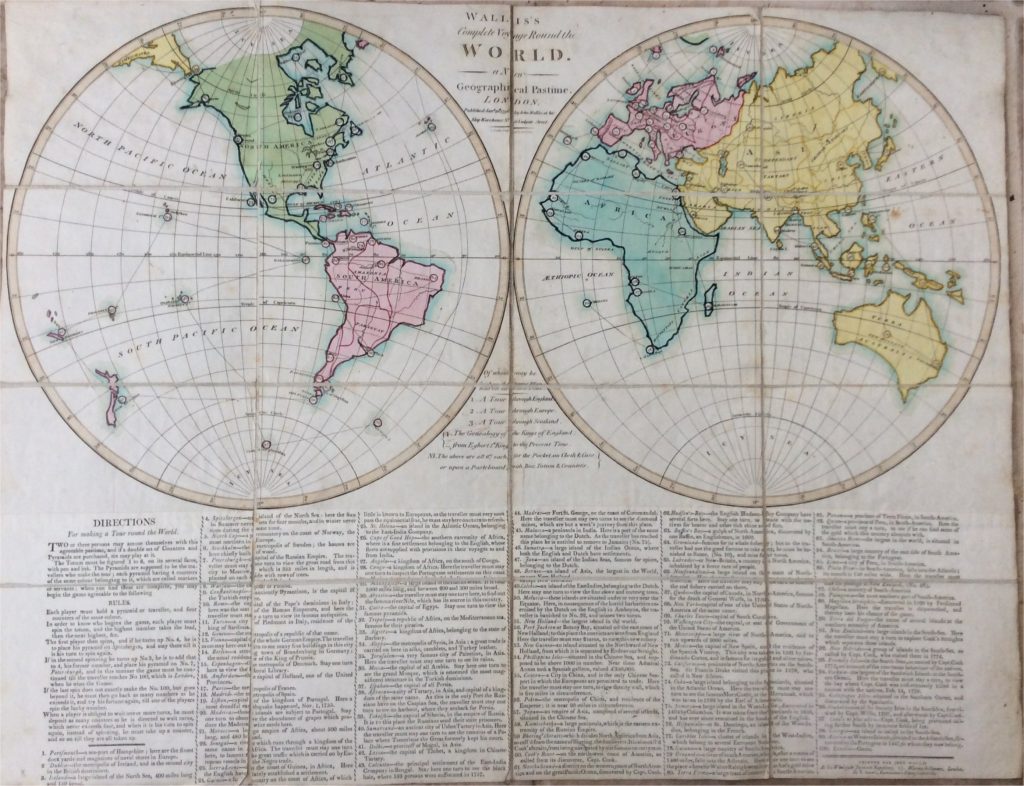 This is a decorative racing game around both hemispheres of The World.

The game itself has small globes representing latitude, longtitude, zones, circles and characteristics.  It is a different game to the John Wallis game that was published in 1797.

Paris now features as the place where Louis XVI was beheaded, but Australia still remains known for the convicts settlement.

Captain Cook is still featured strongly. There is more information about North America than in earlier games.

1816 Walker's Tour through France, being a New Geographcal Game.

Condition – Tour of France / sheet only – very good condition – no damage just a little light foxing (LHS). Back is shaded (but this appears to be due to the absorbance of the paper as the shape match the regions) 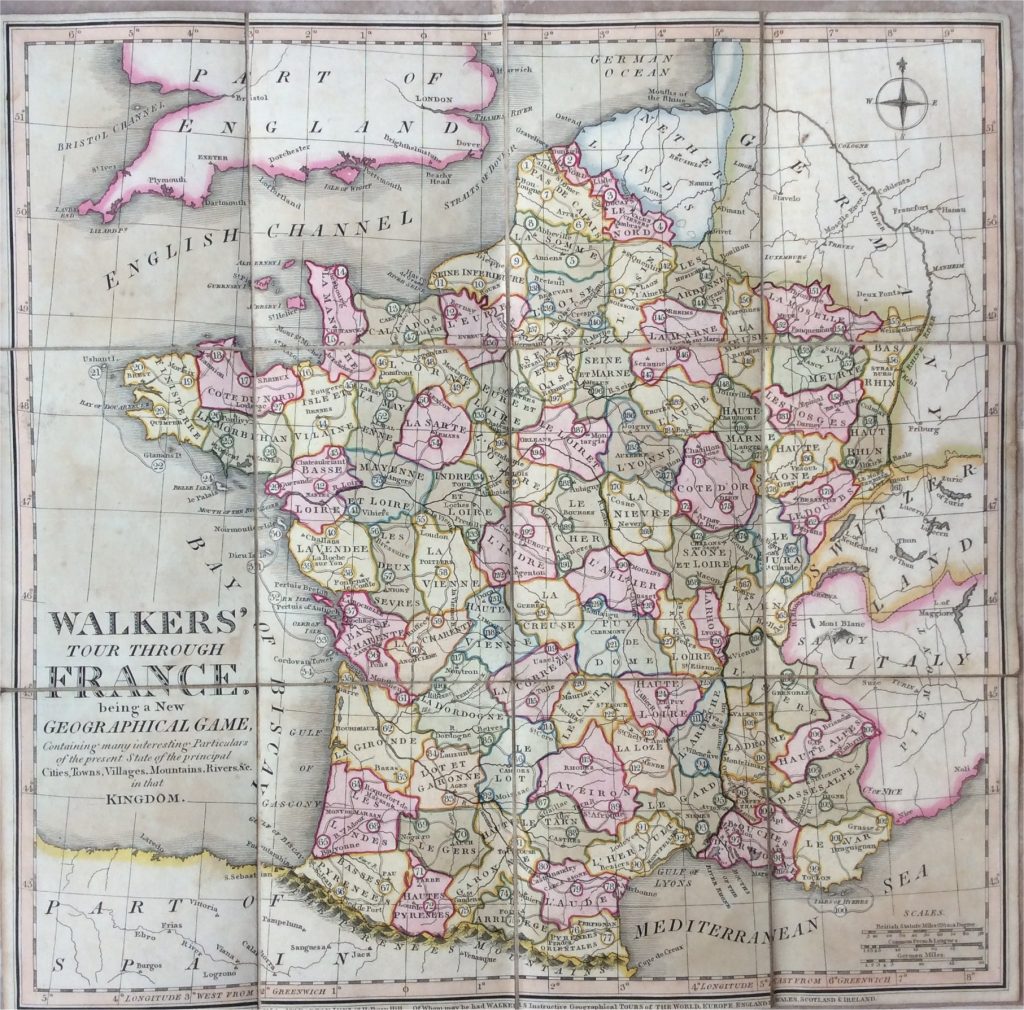 1811 - Tour through the United Kingdom of England, Scotland and Ireland - John Wallis

This is described as “Wallis’s Tour through the United Kingdom of England, Scotland and Ireland. 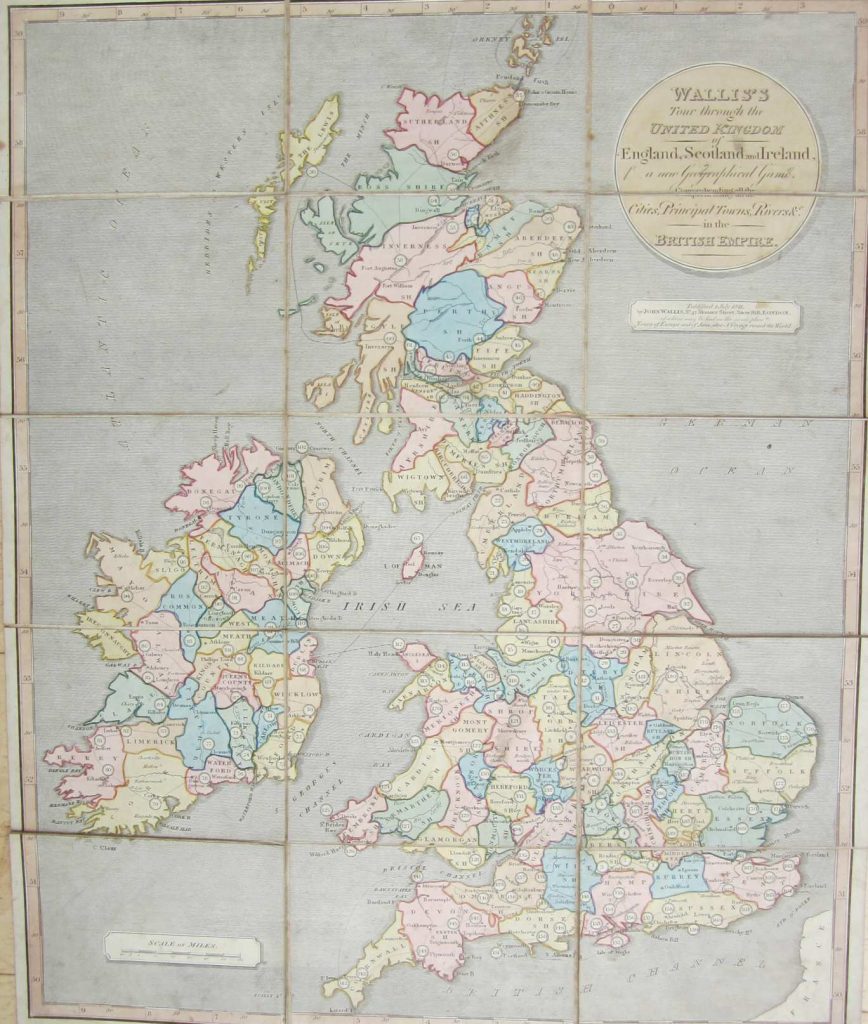 Condition – Middleton Tour of England / sheet only – good condition – one small tear (by the Y of Yorkshire), a couple of odd spots on the margin otherwise clean and undamaged. 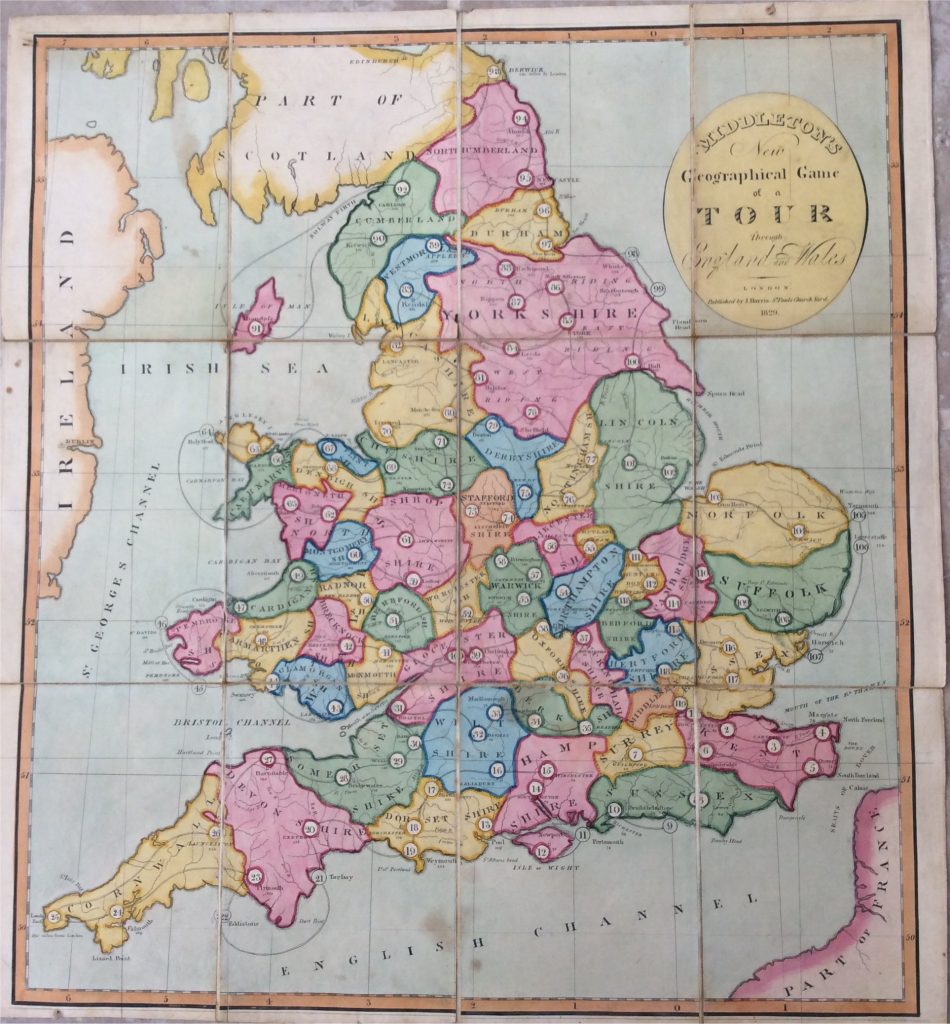 The Royal Genealogical Pastime of the Sovereigns of England
from Egbert to George the 3rd.
Printed in London for Newbery & Wallis, 1791

The Utilities of the Game state “this being a scientific game, in which the amusement and Instruction of the parties are equally considered….this, while it will amuse, will not a little contribute to make the Players acquainted with the Genealogy of their own King”.

Playing The Game – When you land on a space, you then read the details, on the sheet, about the monarch and whether they were regarded as good or bad (or neutral). Your move depends on the monarch landed on, and the game’s view of them

Henry VIII – “as the treatment of his queens was so unjustified, the player must go back to No 1”

Condition – Sheet – undamaged, well colored and clean; some foxing and a stain on the right hand rules (about 5cms by 5cms) / Rules and descriptions all on the sheet – easy to read (with long S) / Slipcase – Good; scuffed but complete with label / Sheet and slipcase both dated 30th Nov 1791

Postage As postage often changes it will be provided at time of purchase. Postage will be at cost rounded up to the nearest £1.00 to cover packaging. 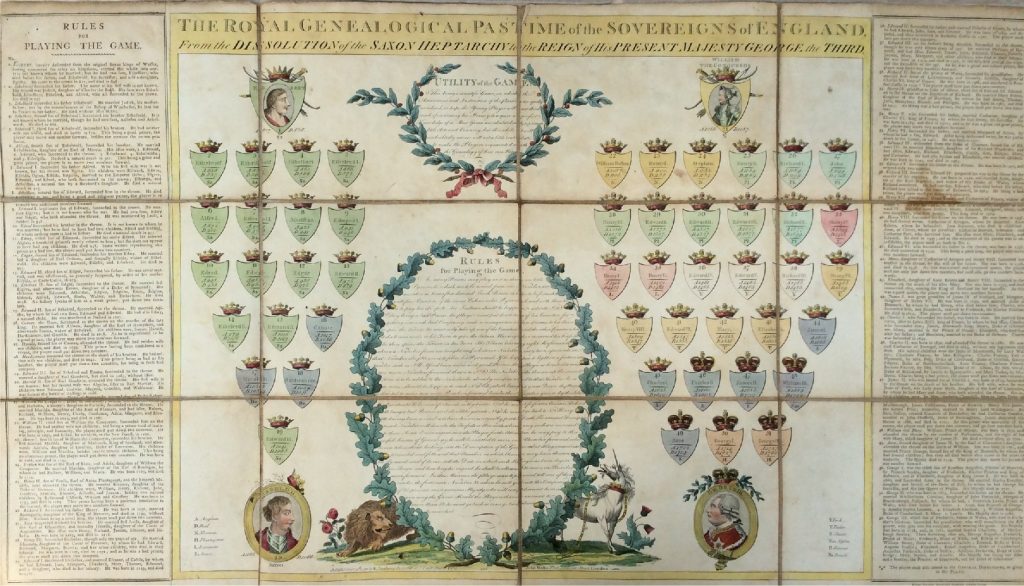 1830 – Historical Pastime, or a New Game of the History of England from William the Conqueror to William IV.

It comprising 133 circles, the last ones being the death of Queen Caroline and The Treasury terminating in an oval portrait of King William IV

Slipcase – “Published by E Wallis and” the last line (which would have read “J Harris & Sons corner of St Paul’s Churchyard”) cut off accidently or did the partnership only last until then. (We have seen a copy with both names on the label). Rule booklet dated 1831 “printed for E Wallis, Skinner Street, and J Harris St Paul’s Church Yard”.

Historical Pastimes – Condition – Playing Sheet is lightly foxed with odd smudges odd small stains on the sheet / Rules book good edges fraded and some light damage / Slipcase – very good, clean.Postage / As postage often changes it will be provided at time of purchase. Postage will be at cost rounded up to the nearest £1.00 to cover packaging. 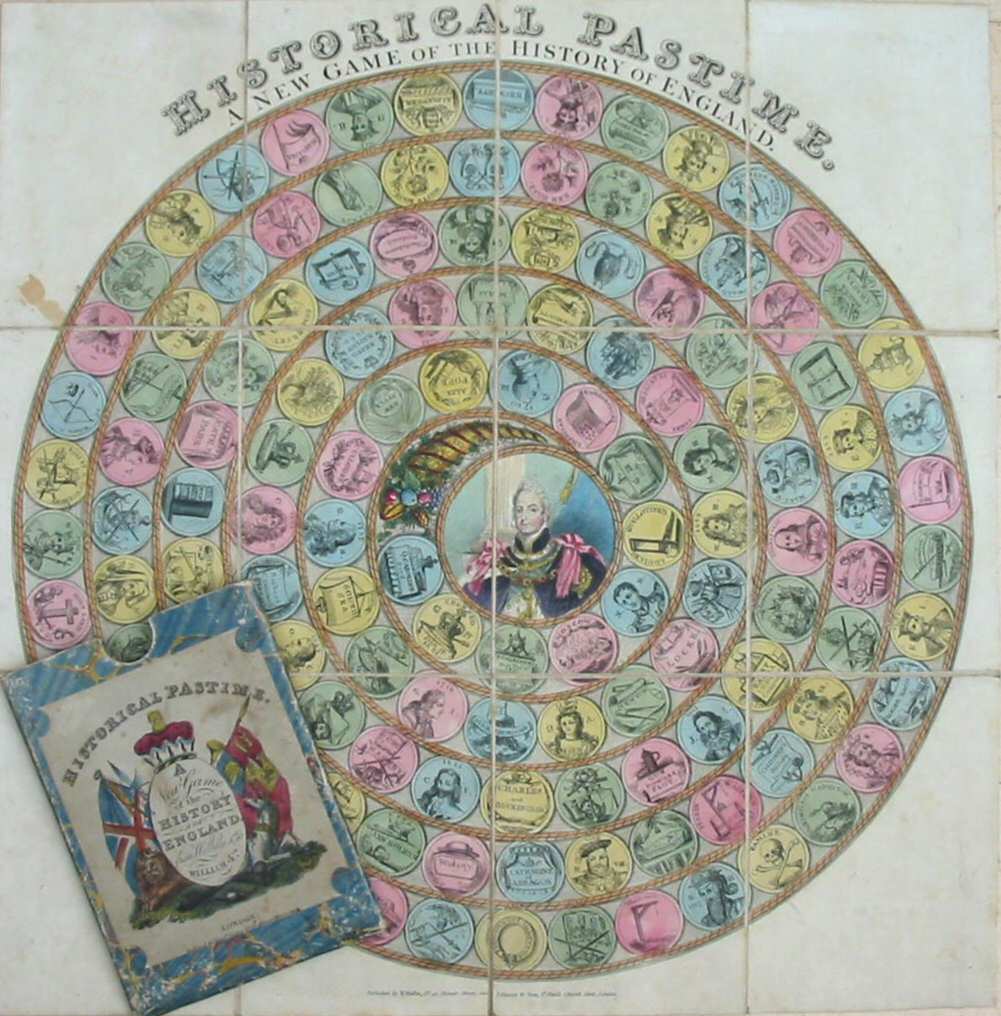 This game was published (and refreshed) a number of times.

This edition features William IV and the abolishment of slavery with original rule booklet. Rare edition and only produced for a short period of time 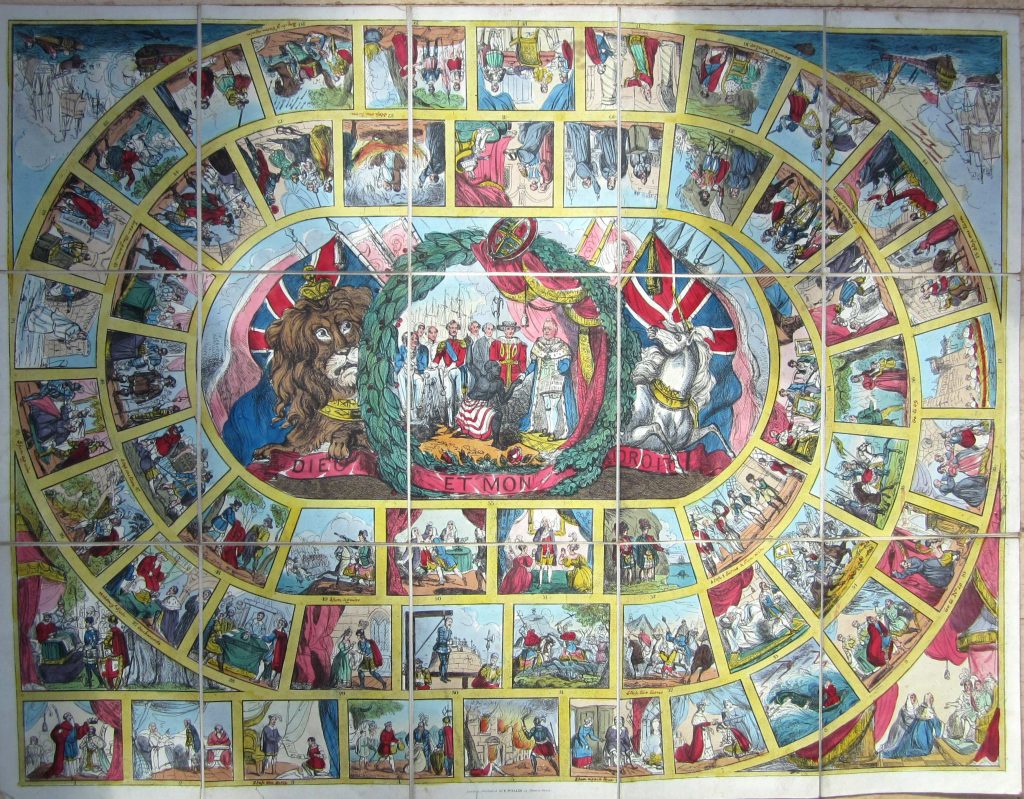 English History in 40 pictures from A Brition, A Roman, A Saxon, A Dan, William I thro to Victoria.
Well colored pictures

Condition – English History / Sheet is very good, clean and little sign of use / Cover (booklike, so attached) is worn and split slightly at the spine, a little grubby with odd marks – title good and clear in gold lettering / Photocopy of rules available 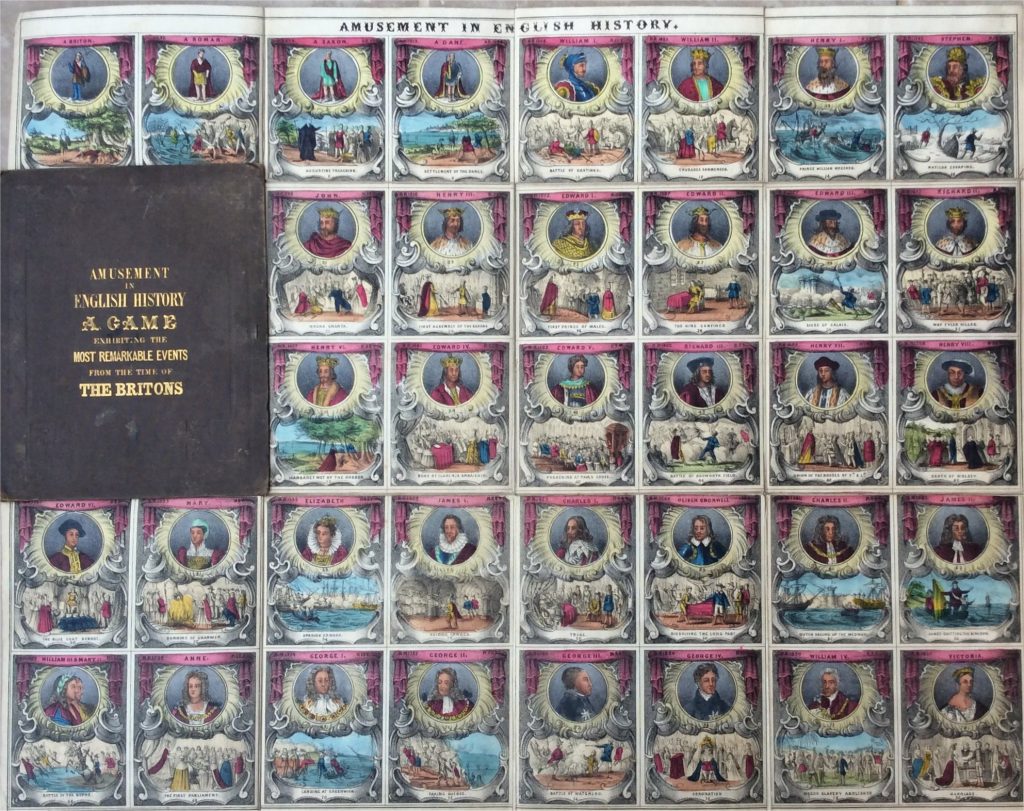 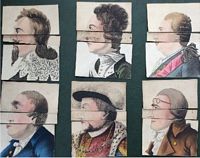